Abraham Lincoln’s deep empathy for the people of America motivated him to agonize over finding just the right words to truly articulate his vision of the future.Gary Wills points out in Lincoln at Gettysburg:The Words that Remade America that in Lincoln’s three minute address during the dedication of the Gettysburg cemetery, he reestablished the meaning to which Americans attribute the Constitution.

Surely, you recognize the words, which began: “Four score and seven years ago our fathers brought forth on this continent a new nation conceived in Liberty and dedicated to the proposition that all men are created equal.”Indeed, this brief introductory sentence encapsulates what we now remember as what the American Civil War was about – freedom and equality for all people.Gary Wills and other historians tell us, though, that until Lincoln spoke these words, these ideals were not what the war “was about.”Wills says that the Civil War means, to most Americans, “what Lincoln wanted it to mean.” The majority of Southerners fighting in the war were not slave owners.Rather, many believed that they were fighting for a “way of life.”Larger issues such as the dynamics of the Southern economy also contributed to the situation.At the 1864 gathering at Gettysburg, Lincoln knew that he needed to articulate what the nation was fighting for -- and he did.

Lincoln’s facility for expression -- his “way with words” – enabled him to frame the meaning of the war for the people of his day in a manner that would empower Americans to frame their quest for civil rights a century later, and to the present day.To understand Lincoln’s accomplishment, consider his strategic situation in the 1850s. 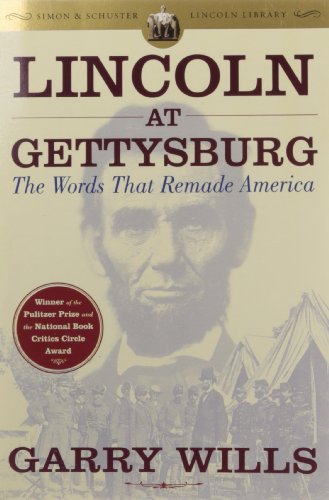 In writing the famous “Dred Scott decision of 1857, Justice Taney of the Supreme Court stated that “The right of property in a slave is distinctly and expressly affirmed in the Constitution of the United States.”Wills says that “Americans at that time were reverent toward (prejudiced in favor of) the Declaration of Independence; yet many of them were also prejudiced in favor of slavery.Lincoln kept arguing, in ingenious ways, that they must, in consistency, give up one or the other prejudice. The two cannot coexist in one mind once their mutual enmity is recognized.”

Lincoln’s use of the Declaration’s phrase about all men being equal elevated the notion to a single, supreme proposition about which we must all agree. Wills says that “by accepting the Gettysburg Address, its concept of a single people dedicated to a proposition, we have been changed.Because of it, we live in a different America.”

Return to History of Strategy page.