Biographers of Napoleon Bonaparte talk about his ability to size up a situation with a single coup d'oeil,(pronounced koo-DOY), meaning “a stroke of the eye” or “glance.” Napoleon was so knowledgeable about his strategic situation—the landscape, the enemy, available technology, similar situations from the past—that he could understand and respond quickly to ever- changing circumstances.

Explaining the quote, historian Liddell Hart says: “A plan, like a tree, must have branches – if it is to bear fruit. A plan with a single aim is apt to prove a barren pole.”

In a movie called Napoleon, released in 1927 by legendary film maker Abel Gance, a key segment about the pivotal battle of Toulon is featured.  A young Napoleon arrives on the scene with abook under his arm symbolizing his years of study of military history.  He finds the French generals and leaders in a pub.

Writing in The Art of War some 2,500 years ago, Sun Tzu postulated two dialectic forces:  Zheng is the “ordinary” element that fixes the enemy in place.  Qi is the unexpected and devastating blow.  Qi is indirect, unorthodox, extraordinary.  Qi does not work, though, unless Zheng is able to hold the opponent in place until the decisive blow is struck. 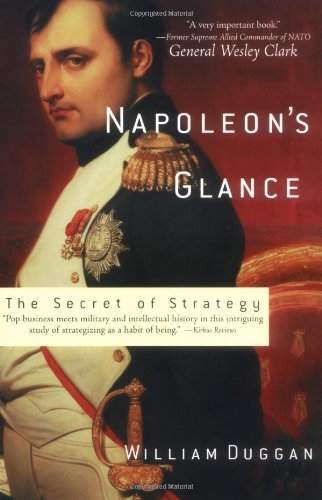 Much of the Art of War is devoted to the value of waiting, waiting and waiting for the right moment to strike.  Sun Tzu says that the greatest victory occurs when the enemy never gets the chance to fight.

Napoleon, another genius of strategy, continually defeated much larger enemy forces using the principle of Qi and Zheng, though he was more likely to call it “manoeuvre sur les derrières.” In what was called the “strategy of the central position,”  Napoleon placed his men between two armies, often by identifying a weak position in which to penetrate between the two. He then assigned a relatively small portion of his army to “hold” one army at bay, while he used his best forces to defeat the other army “in detail.”  Once one army was defeated, Napoleon could turn his Qi forces back to join his Zheng troops, and overwhelm the second enemy.

In Strategy, perhaps the most important and influential book on military strategy ever written (write me if you wonder why), Liddell Basil Hart shows that most successful military campaigns through the ages have featured this “indirect” approach, which, again, is marked by an ordinary Zheng holding force and a complementary, extraordinary, Qi force.  He shows, for example, how another strategic genius, Erwin Rommel, deployed his Panzer units in Northern Africa so as to draw an attack from British tanks, to wait for the enemy to over-commit attention and firepower, to appear almost defeated, and then quickly attacked the Allied army from the side or rear with tanks he’d held out until the critical moment.

At the battle of Chancellorsville during our Civil War, Robert E. Lee and Stonewall Jackson used the notion of Qi and Zheng to perfection.  As Lee kept a portion of his Confederate troops facing the Union army, and making a lot of noise as they did, Jackson led the majority of their troops on a long march out of the area.  Once well out of sight, Jackson’s men were able to double back and attack the Union flank, creating panic among his enemy as a brilliant strike of Qi was executed flawlessly.  In the map to left, Lee’s Zheng troops are indicated with the double-deep broken red lines, and you can see that the Union troops indicated with blue were deployed to face Lee’s Zheng.  The surprise encircling movements of Jackson’s army are indicated with the large red arrow.

Many now believe that the infamous and disastrous Pickett’s Charge at Gettysburg was intended as a show of Zheng, intended to hold the Union troops in place for a cavalry charge from behind that never happened. Still, sending your army straight into hell like this is a bad idea, as the most disastrous war-time decisions have almost always involved a foolish general sending men, en masse, straight at the enemy (for example, battles of Gallipoli, Somme, Cannae).  As Liddell Hart writes, the indirect approach is always best.

Hans Guderian advised Hitler to use the indirect approach in the months preceding the Allied invasion of Normandy.  Not knowing whether the Allies would attack at Normandy, Pas-de-Calais, or to the north in Norway, Hitler insisted on deploying most of his defenses at all possible attack points along the beaches of Europe.  Guderian would have deployed fewer up front, as a Zheng-style holding force, and leave the rest in reserve, ready strike once the right time and place were identified.  Fortunately for us, Hitler wanted to do too much, and squandered a large part of his defenses, since those stationed elsewhere were unable to redeploy to Normandy in time to help stave off the Allied invasion of France.  Hitler could also have heeded, but didn’t, the advice of his own hero, Frederick the Great, who said “he who defends everything, defends nothing.”

Masters of military theory stress the importance of holding divisions of troops back in reserve.  The principle applies to holding back your investment capital as well, whether in the form of finances or precious young baseball prospects.  Reserves should be spent, then, when need is truly identified.

The key is to decide carefully.  As Sun Tzu says “weigh the situation, then move.”

Return to History of Strategy.