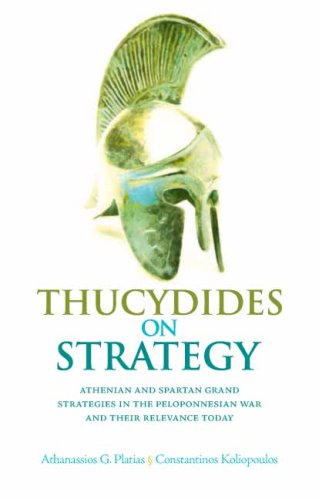 Thucydides on Strategy: Athenian and Spartan Grand Strategies in the Peloponesian War and Their Relevance Today (Columbia/Hurst)
By Constantinos Koliopoulos, Athanassioss G Platias
Buy on Amazon

” At the time, Athens was a great sea power with a democratic political system and innovative leadership that made it a formidable force. Sparta, located in the Peloponnese (the southern peninsula of mainland Greece), was most powerful as a land force. Its system of government favored austere militarism and adherence to tradition. It was the Spartans’ fear of Athens, Thucydides argues, that led them to make their first, preemptive attack in 430.Thucydides believed that time was circular. So as he'd expect, despite 2,500 years since his day, his guidance on strategy as with us still.  from: http://www.history.com/topics/ancient-history/thucydides

Thucydides, unlike Herodotus, makes very little reference to Greece’s gods as active agents in history, preferring to understand events in terms of their human causes.  ibid

ame sorts of strategic questions and problems are likely to recur again and again, as Thucydides says, so long as human nature remains the same.

General of the Army George Catlin Marshall. Speaking at Princeton University on February 22, 1947, Marshall, then Secretary of State, expressed the view that he harbored grave doubts as to “whether a man can think with full wisdom and with deep conviction regarding certain of the basic international issues today who has not at least reviewed in his mind the period of the Peloponnesian War and the Fall of Athens.

Thucydides is generally regarded as one of the first true historians. Like his predecessor Herodotus, known as "the father of history", Thucydides places a high value on eyewitness testimony and writes about events in which he himself probably took part. He also assiduously consulted written documents and interviewed participants about the events that he recorded. Unlike Herodotus, whose stories often teach that a foolish arrogance invites the wrath of the gods, Thucydides does not acknowledge divine intervention in human affairs. - wikipedia

That Thucydides was clearly moved by the suffering inherent in war and concerned about the excesses to which human nature is prone in such circumstances is evident in his analysis of the atrocities committed during civil conflict on Corcyra,[26] which includes the phrase "War is a violent teacher" (Greek πόλεμος βίαιος διδάσκαλος).

Thucydides is generally regarded as one of the first true historians. Like his predecessor Herodotus, known as "the father of history", Thucydides places a high value on eyewitness testimony and writes about events in which he himself probably took part. He also assiduously consulted written documents and interviewed participants about the events that he recorded. Unlike Herodotus, whose stories often teach that a foolish arrogance invites the wrath of the gods, Thucydides does not acknowledge divine intervention in human affairs.[32]

Thucydides is especially interested in the relationship between human intelligence and judgment,[40] Fortune and Necessity,[41] and that history, as in life, is too irrational and incalculable to predict.[42]

Scholars traditionally view Thucydides as recognizing and teaching the lesson that democracies need leadership, but that leadership can be dangerous to democracy

Thucydides's fastidious devotion to observable phenomena, focus on cause and effect, and strict exclusion of other factors anticipates twentieth century scientific positivism.

Thucydides and his immediate predecessor Herodotus both exerted a significant influence on Western historiography. Thucydides does not mention his counterpart by name, but his famous introductory statement is thought to refer to him:[49][50]

To hear this history rehearsed, for that there be inserted in it no fables, shall be perhaps not delightful. But he that desires to look into the truth of things done, and which (according to the condition of humanity) may be done again, or at least their like, shall find enough herein to make him think it profitable. And it is compiled rather for an everlasting possession than to be rehearsed for a prize.

Friedrich Nietzsche wrote that the best antidotes for Platonism were to be found in Thucydides:

"My recreation, my predilection, my cure, after all Platonism, has always been Thucydides. Thucydides and perhaps Machiavelli's Principe are most closely related to me owing to the absolute determination which they show of refusing to deceive themselves and of seeing reason in reality – not in "rationality," and still less in "morality." There is no more radical cure than Thucydides for the lamentably rose-coloured idealisation of the Greeks... His writings must be carefully studied line by line, and his unuttered thoughts must be read as distinctly as what he actually says. There are few thinkers so rich in unuttered thoughts... Thucydides is the great summing up, the final manifestation of that strong, severe positivism which lay in the instincts of the ancient Hellene. After all, it is courage in the face of reality that distinguishes such natures as Thucydides from Plato: Plato is a coward in the face of reality – consequently he takes refuge in the ideal: Thucydides is a master of himself – consequently he is able to master life." (A Nietzsche Compendium, Twilight of the Idols, trans. Anthony M. Ludovici)